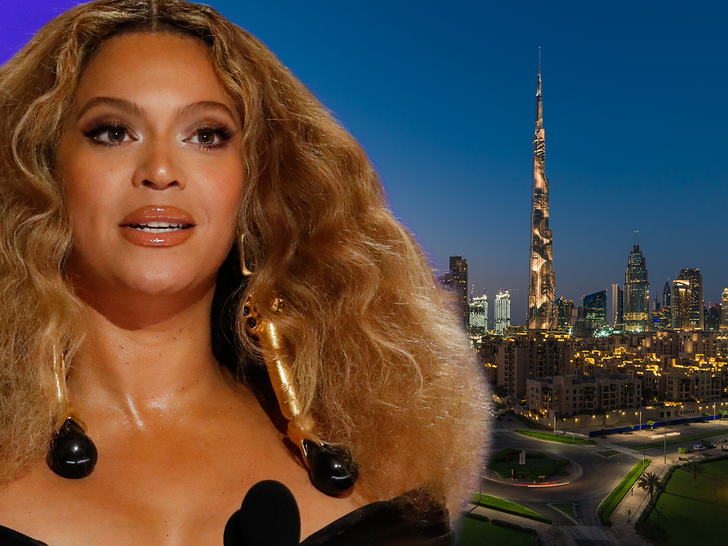 In the digital era, not even Beyoncé can beat cell phones -- her performance in Dubai was caught on camera by several people ... despite going above and beyond to keep it secret.

The singer's down in the UAE, where she's been booked for a show at (or near) this swanky hotel called Atlantis The Royal ... which supposedly shelled out millions for her services, upwards of $24 million for just a ONE-HOUR set -- that's the word on the street, anyway.

Tons of videos circulated Saturday in the lead-up to her gig, where people who had snagged a seat to the show were reporting that the hotel and other honchos were demanding people put their devices in locked zip bags -- similar to how a lot of comics do these days.

There was also a live feed stream the hotel had up that had been capturing a lot of her sound checks in rehearsal ... which was promptly cut off right at the curtain call. And yet, despite their best efforts -- people on the ground were able to film it all regardless. 🤷🏽‍♂️

A livestream showing The Atlantis resort cut off immediately as Beyoncé hit the stage. It’s possible Wi-Fi has been turned off, and signal blockers could be in use. #BeyonceInDubai pic.twitter.com/q21sqK9KWf

You can hop into the Beyoncé trend right now on Twitter and see all the footage for yourself -- it sounds like she opened with a cover of Etta James's 'At Last,' and then went on to perform a few of her own tracks ... like 'XO,' 'Brown Skin Girl' and other 'Renaissance' songs.

Bey was decked out in an elaborate, flowing yellow dress ... and the stage design was pretty intricate too -- coupled with a live orchestra and an awesome rising run backdrop to boot.

“My love has come along, my lonely days are over.” pic.twitter.com/XgGLMVUE9v

Sounds like things are going swimmingly, 'cause the crowd is cheering her on big time ... which is a good sign of what's to come. Reports say this is a precursor to her upcoming worldwide 'Renaissance' tour -- and so far, it seems like the product is being well-received.

BTW, this outing is a family affair ... Jay-Z was spotted near the Atlantis -- cozy up in his own private box with a bird's-eye view of the stage -- and Blue Ivy's there too. She even came on stage with mom at one point, continuing the tradition of sharing the spotlight.

Beyoncé fans are certainly stoked ... they've been waiting for her hit the road. 'Renaissance' came out about 6 months ago, and their appetite to see their Queen Bey get on the mic has been swelling like crazy. Now, they're getting their first taste of what's surely to come.

Official tour dates have yet to be announced, but after this mass leaking ... she might as well come out with it sooner than later. The people are restless!