Gloria Trevi: Who Was She? 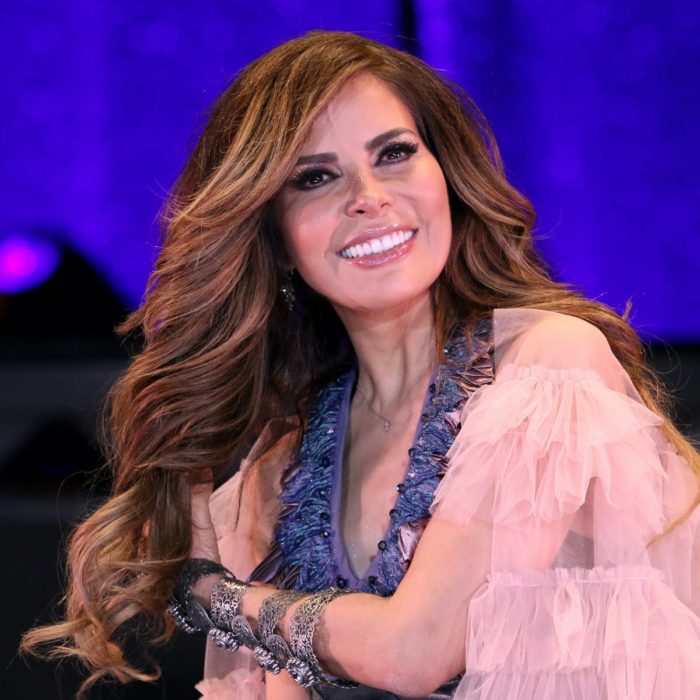 Gloria Trevi rose to prominence in the 1990s with the success of her debut album Que Hago Aqui? (What Am I Doing Here?). Her career, however, came to an abrupt halt when she and manager Sergio Andrade were charged with corrupting youngsters, sexually abusing them, and abduction. The couple escaped Mexico but were apprehended and imprisoned in Brazil in 2000. Trevi was freed in 2004 and sought to reintroduce herself to the public with a new album and tour.

Gloria de Los Angeles Trevino Ruiz was born in Monterrey, Mexico, on February 15, 1968. She was the eldest of five siblings.

Her ambition to be a performer began at an early age. Trevi began studying poetry recitals at the age of five, followed by ballet and piano classes, and subsequently took up drumming. Her parents split when she was ten, and she fled home against her mother's wishes at the age of twelve.

Trevi moved to Mexico City alone in 1980, with little money, in order to pursue a career in the entertainment sector. She made money in a variety of ways, including street singing and dancing, teaching aerobics, and working at a taco stand.

Trevi met Sergio Andrade, 28, in 1984, when she was sixteen years old. Sergio Andrade became her instructor. In 1985, she temporarily became a member of the female band Boquitas Pintadas (Little Mouths with Lipstick). Trevi opted to pursue a solo career after being heavily influenced by British and American rock and Latin music. Trevi's debut album Que Hago Aqui? (What Am I Doing Here?) (1989), which was an instant chart hit, was managed by Sergio Andrade.

Trevi recorded five albums and featured in three Mexican box-office smashes between 1991 and 1996. She toured the Caribbean and South America in 1992, performing for crowds in the Dominican Republic, Argentina, Chile, and Puerto Rico. Her music was aggressive and political, with sexually suggestive lyrics, but her goal was always to expose hypocrites.

Trevi was a fiery orator who spoke out against religion, prostitution, drug trafficking, famine, the upper class, and war dead. She questioned Mexican macho and frequently turned the tables on men during her sensuous performances, pulling them up on stage and stripping them down to their underwear. Trevi also created a slew of risque calendars in this same era.

Despite, or maybe because of, her more raunchy side, Trevi was admired by young Mexican and Latin American females who dressed like her, shopping at the newly opened Trevi stores. Trevi was quickly dubbed the Mexican Madonna. She even developed a passion for public speaking, speaking on topics such as AIDS, abortion, drugs, sex, prostitution, and panhandling. She appeared on the covers of various periodicals, was the subject of television programs, and served as the inspiration for the Trevi comic novels.

Crimes and Running From the Law

Trevi's popularity and glory came crumbling down around her in 1998, not long after she married Andrade. It all began with the release of a book by Aline Hernandez, a former backup vocalist for Andrade. De la Gloria al Infierno (From Glory to Hell), her autobiography, recounted her relationship with Andrade.

Hernandez had married when he was just 13 years old. By 1996, Hernandez had escaped Andrade at the age of 17. She alleged that Andrade was a nasty, dominating misogynist who kidnapped young girls, and promised to make them celebrities, but instead lured them into a life of enslavement, torture, and prostitution. Additionally, Hernandez said that Trevi was in love with Andrade and was a willing participant in his sexual orgies and enslavement. As she put it, "Gloria, I believe, arrived as innocent as the rest of us. If Gloria was complicit in any of this, it was because [Andrade] sickened her, transformed her, trained and schooled her in his image."

In 1999, some females who were enslaved by Andrade escaped and quickly went public with their testimonies. They described being beaten, mistreated, and starving in televised interviews, much as Hernandez alleged in her book. Karina Yapor described how, at the age of 12, she left her home in Chihuahua, Mexico, and moved to Mexico City to live with Andrade and Trevi. She had given birth to a baby boy a year later, at the age of 13, and claimed Andrade was the father. She eventually authored a book on her experience with Andrade and Trevi, in which she detailed the horrific physical and psychological torture she endured.

Karola and Katia de la Cuesta, two adolescent sisters, brought similar charges of sexual abuse against Andrade and Trevi, who employed them initially as backup vocalists. Another adolescent, Delia Gonzalez, said Trevi had recruited her as a vocalist. She had been coerced into producing a pornographic video and had been subjected to nine months of frequent rapes and beatings at the hands of Andrade.

In 1999, the Mexican authorities were forced to intervene in response to public charges of enslavement, brutality, and sexual abuse at the hands of Andrade and his collaborator, Trevi.

They charged Sergio Andrade, Gloria Trevi, and Maria Raquel Portillo (a.k.a. Mary Boquitas), a choreographer and backing vocalist, with corrupting kids, sexual assault, and kidnapping. The three, who were widely publicized, rejected the claims and made their way out of Mexico with around a dozen females. The Mexican justice system deemed them to be fugitives.

Andrade, Trevi, Boquitas, and their troop of females traveled to Spain and then to Chile in late 1999. They relocated to Argentina shortly thereafter.

The adolescent girls escaped to Argentina and were later returned to their families in Mexico. Andrade, Trevi, and Boquitas subsequently relocated to Brazil, where Trevi delighted in exploring their area and stopping daily for a meal at a local bakery.

The three stayed in Brazil for several months before being apprehended and detained by Brazilian authorities in January 2000.

While the three awaited their destiny in a Brazilian prison, their detention generated a legal struggle. Prosecutors in Brazil desired to charge the trio in their own country, where they had been detained. However, they were claimed by Mexican prosecutors due to the fact that all of the alleged crimes began in Mexico.

In April 2000, a Brazilian federal court determined that a thorough study of the evidence against Trevi, Andrade, and Boquitas was necessary before considering Mexico's extradition request. Due to overpopulation in the institution where they were being kept, the three were transferred to another Brazilian jail. Trevi fell pregnant while she was there and accused a jail officer of raping her. Pregnant women convicts in Brazil were assigned separate quarters where they could live with their children. Trevi was sent to such a facility but was quickly returned to prison as a result of Mexican authorities' coercion.

Trevi gave birth to a boy, Angel Gabriel, in Brasilia, Brazil, on February 18, 2002. Authorities declined her plea to keep her father's name a secret the next day. Andrade's paternity was established by DNA testing. While Trevi and Andrade prohibited conjugal visits, it is alleged that they paid a jail guard in order to arrange for time alone to have sex.

Trevi penned her autobiography, Gloria by Gloria Trevi, while incarcerated in 2002. She depicts herself as a completely innocent victim, while the other clan girls are portrayed as greedy liars. She claims she consented to almost 15 years of abuse as a result of Andrade's strong and unyielding grasp on her.

The Brazilian and Mexican governments eventually reached a deal, and on December 21, 2002, Trevi and Boquitas were deported to Mexico to face charges. They were transferred to the Aquilas Serdan jail in Chihuahua, where Trevi's infant boy was placed with his maternal grandmother.

Trevi was said to have given birth to her and Andrade's daughter while on the run, and officials were examining the potential of charging the couple with homicide as well. However, because no evidence was ever discovered and no corpse was ever discovered, the homicide charges were withdrawn.

Trevi awaited trial in late 2002 and early 2003 but to no effect. With time, it became clear that the Mexican police were having difficulty locating tangible proof of the claimed crimes. Andrade was subsequently deported to Mexico in November 2003 and placed in the same jail as Trevi. The pair were not permitted to communicate.

In 2004, Christopher McDougall of the New York Times magazine wrote Girl Trouble: The True Saga of Superstar Gloria Trevi and the Secret Teenage Sex Cult that Astounded the World. According to some, the book was the most authoritative description of what actually occurred. McDougall had personally interrogated Trevi and Andrade, as well as a number of the young females involved, in order to obtain details about what occurred while the gang was fugitives.

Trevi was informed on 24 February 2004 that she would be released from prison, but the Mexican authorities rejected her release. Incensed, she embarked on a hunger strike. On September 21, 2004, seven months later, she was eventually acquitted by a Mexican court, citing a lack of evidence in the case. Trevi was freed from jail in Brazil and Mexico after serving a little over four years and eight months.

Determined to resurrect her career, she returned to the studio immediately and began recording. In 2004, she published the album Como Nace el Universo (How the Universe Began). Trevi announced a 23-city tour of the United States named Trevolucion on Valentine's Day 2005, a day before her 37th birthday. Trevi appeared to have put her tribulations behind her and reverted to her former self. She released her debut album, La Trayectoria, in 2006. (The Trajectory). Trevi is presently dating Miguel Armando, with whom she gave birth to a kid in 2005.

Gloria Trevi lost all her glory due to her sadistic approach of her toward society. But we have a lot of good names in the music industry, to learn who the best music artist was, click here.